Received some amazing pictures last week from one of our artists, Jill Newman. The images are of the largest  ‘urban forest’ in the country, inside the Heygate Estate, Elephant and Castle.

It needs protecting from Southwark Council and property developers Lend-Leese who plan to demolish the old estate and build “luxury flats.” (Jill Newman)

Click here to see the rest of the images. I particularly like the black and white ones as it gives it a more magical quality, like a well-kept secret.

We recently ran two ‘Fire-Etching’ workshops as part of our Service Level Agreement (S.L.A) with Southwark Council. Southwark needed us to brand some signposts for Southwark Park but with the collaborative efforts of the local community.

Initially marketed as ‘Branding‘ workshops, we found despite a healthy turnout on our first session that many people were confused with the word ‘Branding’, associating it with the kind of branding you refer to in the marketing world. Our workshop was definitely much more exciting and hands on than this!

So, the workshop was rebirthed (over soup, bread and other grown tidbits from our garden) into ‘Fire-etching.’ I don’t like to brag (maybe just a little) but I came up with it thinking along the lines of scorching wood with fire.

The first session was held on Thursday 24th February and we were blessed with a rare day of sunshine (some warmth) and a bucket-loads of children to the playground. Easing participants to our outdoor fire-etching setup was then a question of safety as we could only have a maximum number of people etching at a time.

Our second session on the Saturday 5th March (you can’t have the same luck twice) was a gloomy and chilly day with not as much people turning up as the previous session but still a pretty healthy turnout. However, a more manageable number meant you could spend more time on one signpost, giving way to much progress that day. All in all, the two sessions bore very healthy results and participants found themselves intrigued and hooked onto ‘fire-etching.’

“What the heck is fire-etching?”

Here is a brief lowdown on ‘fire-etching’:

Here’s something to cheer those who may having the winter blues, all of which are most likely snow-related. To those who haven’t got the blues, well…you’ll enjoy it even more seeing as you’re still perky during this ‘big freeze.’

Art in the Park had a pleasant surprise this morning when we saw a young man, the name of Taro Mckinson building (though already completed when we arrived) an igloo! When asked about how long it took to craft such a cavernous and sturdy igloo, he replied with an surprising answer, stating he started working on it since 1 o’clock in the morning! Also, with no previous experience of building igloos, his first attempt at it is very not bad! This metre and half (roughly, I did not measure) igloo sits nearby Chumleigh Cafe and the Children’s Playground in Burgess Park.

When told that Southwark Council would have to take down the igloo (for health and safety reasons), he smiled and said ‘It doesn’t matter, it’s just for fun.’ Unphased by this piece of news, he continues to build his next piece, a snowman using a bucket and spade.We will continue to monitor his progress and hopefully have some pictures of this later.

For those venturing out today to the Cafe, playground or if you are just passing through Burgess Park, be sure to check out (and take some pictures with you posing next to it obviously) before it’s gone! If our elderly volunteer Brian can have a snowfight against 3-4 children, then you certainly can enjoy the snow while it’s here. If you have any stories about snow, we’d love to hear about it!

We are proud and happy to announce that a long standing volunteer of ours, Cynthia was shortlisted and awarded the Active Citizenship award. The ceremony took place last Friday evening at Amigo Hall, St George’s Cathedral and was organised by Volunteer Centre Southwark. Despite initial worries on the formal dress code, Cynthia finally chose an elegant blue number. Very classy we must say! 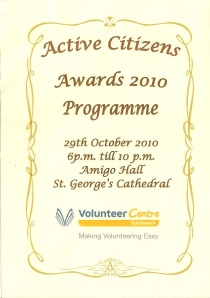 Cynthia was amazed at the quality and vibrancy of the entertainment starting with the steel pan at the buffet. This was all a wonderful added extra as she had not been expecting it.

After the lovely champagne reception and buffet, there was a ceremonial welcoming speech before performances went underway with master drummer Henri Gobi. The De-Masokhi dance group then took to the stage with a traditional style of dance but not before the very important awards ceremony. The audience were then treated to a poetic reading by Baden Prince Jnr and a lovely song by the IDMC Choir. The evening ended with comments from Clive Pankhurst, the CEO of Volunteer Centre Southwark.

All in all, it was a very enjoyable evening for all those involved and a great way to thank those who regularly took their time to volunteer and give something back to the community. A big congratulations to all those who received an award!

Art in the Park Tweets